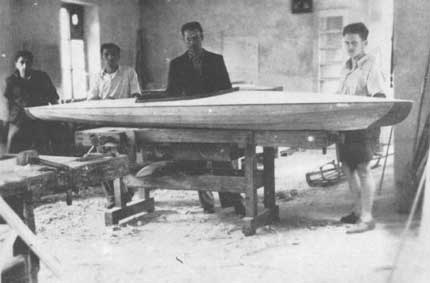 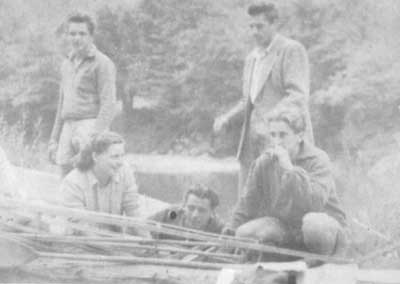 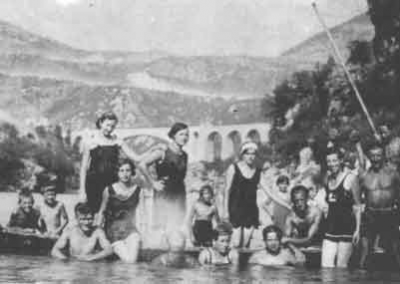 The beginnings of kayaking

The tradition of kayaking on the Soča River is old, as people needed boats for daily crossing the river, fishing, catching wood, rafting wood from mountainous areas to the lowlands. A sawmill was established in Solkan on the banks of the Soča, which enabled the development of the renowned Solkan carpentry trade.
In addition to furniture masterpieces, Solkan carpenters also made boats and small “batels”, which were used primarily for recreation.
Around 1937, carpenters began making lighter (20-45kg) and agile boats for winding down rapids. The boats were for one person and rowing required a great deal of knowledge, strength and endurance. From Kanal to the mouth of the Vipava river into the Soča near Sovodnje and along the Vipava to Orehovelj, the daring Solkans in kayaks were known everywhere.

The development of recreational kayaking was interrupted by World War II, but pre-war enthusiasm was revived. Unfortunately, the new border crossed the Soča River between the Barka area on the left bank and Škrla on the Štmaver side, disabling the former paddling routes. After that, it was only possible to paddle from the Solkan bridge upwards. A decisive meeting of the future “Brodarsko duštvo” was convened on the initiative of the People’s Technology Committee in January 1948 in the carpentry workshop of Toni Prijon. Danijel Bašin, Zdravko Bašin, Pavel Bone, Toni Prijon, Cvetko Srebrnič, Jože Srebrnič, Marke Vižin and Izidor Vuga gathered. “Brodarsko društvo” was founded and the headquarters of the association and workshop were arranged in the old barn, which was given by the first president Zdravko Bašin. The members focused their activities on the fields of kayaking, sailing, modeling and motonautics. In the same year, two members of the association, Pavel Bone and Toni Prijon, attended a wild water kayak course in Celje. In addition to paddling skills, they brought a kayak with a wooden frame and a rubber coating. Meanwhile, in the association’s workshop, members made wooden canoes and models of sailboats.
^

The first trainings and competitions

In the winter of 1948/49, the first organized trainings with modest club equipment began: 4 canoes and one kayak, which was stored in a shed by the Soča. The wooden boat with a rubber coating was still quite heavy and very clumsy for today’s conditions, but in those conditions it was a revolutionary novelty; with it began a new era of kayaking on the Soča.
The members of the association introduced themselves to the general public for the first time in 1949 by participating in the May Day parade in Ljubljana. They participated in several competitions in the same year. At the elimination competition in padsling on flat waters in Ljubljana and Maribor, the members of the association qualified for the finals,
at the national championship in Trbovlje, a member of the association, Miran Mozetič, joined the national team.
The first competitions were also organized on the Soča and on the river Vipava.

The award for the successful work of the association in 1949 – Radio Kosmaj – further encouraged the work of all members and helped increase membership. Extremely modest club equipment, however, prevented an even greater flourishing of activities on the Soča. In 1950, members of the society participated in only a few matches on flat waters since there were no suitable props for different paddling. On May 25, Marshal Tito was sent a gift-model of a sailboat, during which the marshal took a photo at the time, thus giving great recognition to the model makers. In the same year, they received a beautiful sailboat “Sava” and some small equipment for water sports as an award within the People’s Technique in Yugoslavia. The members of the club decided to sell the sailboat with the proceeds, bought material for their own boathouse along the Soča, which they built in 1951, so they did not compete that year. The building was also completed in the first half of 1952, and members of the association were able to transfer their props into it. The competitive spirit reawakened and they continued training. Members were also given two new kayaks, which partially improved the condition of the then almost completely worn-out equipment.
^

In 1954, members made the first folding wooden kayaks with a rubber coating in their workshop. This was a great work success, which also enabled the wider and successful participation of members in competitions. A lot of work and ingenuity led to new work successes in 1955, when the first rubber kayaks for wild water were made in the club workshop. This year marks the beginning of a reorientation of club members: from paddling flat waters to kayaking on wild waters. With the possibility of making boats in their own workshop, the interest in the kayak section in the association also increased, while the other sections of the club slowly slowed down their initial success. There were competitions in Slovenia, where the competitors achieved excellent results.
^

In 1956, the association entered equipped with six rubber kayaks for wild water, which, in addition to canoes, was already a solid basis for sports. From Plavi to Solkan slalom race was organized on the Soča and in May also the national championship. In the same year, the members of the club also participated in the international competition in Merano (Italy), where they achieved some extraordinary successes: the team consisting of Pavel Bone, Miran Mozetič and Jože Srebrnič won the slalom, and the competitors also performed successfully in individual races. This competition was also the first contact with international sports, and the success of the competition was a confirmation of the work done so far in the association and at the same time the realization that hard work will make it possible to establish contact with the world’s elite in kayaking. The appearance of the kayakers from Solkan at this competition was a big surprise for the world sports public, as they climbed from anonymity to a high place overnight, thus indicating their intention to penetrate the world’s top wild water kayaking. In the same year, the first international competition was organized on the Soča with the participation of the best competitors from Italy, Austria, the German Democratic Republic and Czechoslovakia.

In the following years, the work in the association continued. Nevertheless, the association was constantly plagued by great financial and material difficulties. These eventually led to the reorganization and renaming of the society. Soške elektrarne, in agreement with the Brodarska zveza Slovenije and the District Association for Physical Culture, took over the sponsorship of the activities of the association, which was therefore renamed the Kajak Club Soške elektrarne (KKSE). The cooperation between the staff of Soške elektrarne and the members of the club was strengthened and enabled the continuation of the rowing tradition on the Soča.

Thirty years of operation of the club fulfills many sporting successes. At international competitions, the members of the club regularly reached the highest places for many years, thus bearing the name of the club across Europe. In addition, they have won over 50 state titles among members and almost as many among juniors. In its activities, the club added 15 members to the national team, who more than honorably represented the name of the club. They also achieved some extraordinary results in the competitions of the highest class – world championships.

However, the operation of the club was not limited to participation in competitions. Attention was also paid to the education of judges and coaches, as the club had 35 national, 5 federal and 3 international judges and 5 instructors. At the end of the seventies, the club also got its own coach, so that new opportunities for more planned work and education of new players opened up. Competitions at Mrzlek, in Plave, in Bovec, on the river Idrijca are known to all sports fans at home and abroad. Special emphasis should also be placed on the organizational work in the club, which has developed in parallel with the growth of other types of club life.
In order to spread kayaking to the entire Soča Valley, the club invested a lot of effort in establishing sections in Bovec, Kobarid and Trebuša on the river Idrijca.

More than twenty years of the life of the Kayak Club Soške elektrarne are adorned with the greatest sporting successes: medals and titles of world champions at youth and member world championships have become a constant and raised the expectations of sports enthusiasts and the public across borders.

The last farewell from the old boathouse at the famous location “Pri Bokalu” was in 1979. The further development of events left a lasting mark in the lives of the locals. HPP Solkan, which was built on the foundations of the boathouse from 1979 to 1983, certainly contributed to the development of the local economy and the reduction of our country’s energy dependence, and in return it picked up the beautiful last 12 kilometers of rapids that the Soča offered before it lazily spilled across the plain on the Italian side.

The branch of the Kayak Club Soške elektrarne on Most na Soči has been operating since 2001. Kayaking took place on Most soon after the Second World War, but organized trainings in this subalpine place began under the leadership of visionary Dejan Testen more than twenty years ago.

KKSE got its first new premises next to the new hydroelectric power plant. After almost a quarter of a century, nostalgia for the lost paradise took shape in the form of a new sports and recreation zone “Na jezu”. The idea of arranging a competition range has actually been simmering since 1983, when the Solkan kayakers lost suitable natural training grounds with the addition of the Solkan HPP. With the confirmation of the 2006 World Junior Championships, the new premises of the Kayak Center were arranged along the course in Solkan, which today hosts both national and international competitions. Here we train new athletes who bring home success at the global level.